Al’Diabolos, or more commonly known as Diablo, is the most popular of the 7 Great Evils. He is the most active of the Great Evils and has tormented Sanctuary many times before. His entity is of depthless evil.

Diablo is actually the youngest of the 3 brothers and considered to be the most creative and farsighted amongst demon kind. It can be argued that Mephisto is, in fact, the most intelligent, but intelligence and evil have many facets.

Diablo’s main focus is to instill terror to all those around him. He is calm, cunning, and patient. His weapons include fear, shock, and hopelessness. One of this greatest powers is to cast his influence into his victims minds, using their own fears against them. Diablo sees his victims as projects, and takes great pleasure in terrorizing them overtime. Unlike Mephisto, who loves to conquest, Diablo feeds on the terror and fear he instills into his victims; even more so than pain.

Diablo resides in one of the most unpopulated areas of hell. This part of hell is so treacherous, only a few demons can withstand its unrelenting torment. This Realm of Terror is desolate, filled with horrific scenes of darkness, madness, horror, and utter despair.

Diablo’s secret is that men are afraid to face their fears. The fears men have is the secret to Diablo’s reign of terror. “For as long as man fears the dark. Diablo will remain the most insidious and, I would argue, the most powerful of all the Evils,” Decard Cain. 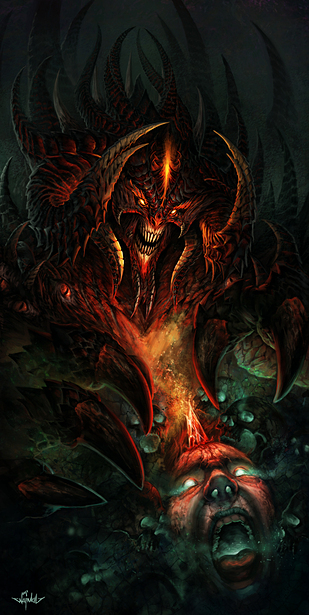