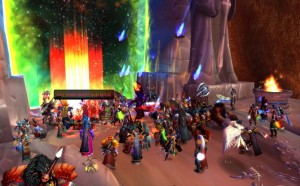 Warlords of Draenor will take players on a journey to the savage world of Draenor to stand against a formidable new threat to Azeroth: the Iron Horde, an orc army forged from the raw materials of legend. Just step through .

For both Horde and Alliance players, the campaign starts behind enemy lines in the Tanaan Jungle on Draenor. It’s up to you and your allies to prevent the seemingly unstoppable Iron Horde forces from passing through the portal to wreak havoc upon Azeroth as you know it.

Once on Draenor, you’ll face the might of great orc warlords like Grommash Hellscream and Kilrogg Deadeye, who command a legion of 10,000 orcs from Draenor’s united clans—but you won’t have to take on this desperate mission alone. The great draenei champion Vindicator Maraad will accompany the Alliance through the portal, while the Horde will go through backed by Thrall. Your strike on Draenor is practically a suicide mission, but if you can destroy the portal from the other side, you’ll buy your faction—and Azeroth—some much-needed time.

All level-90 (WoW Power Leveling Service) players will begin in the Tanaan Jungle, and for newly boosted level-90 characters, the experience will be tailored to help you get up to speed and ready for taking on the challenges to come. Instead of gaining all of your skills and abilities right away, you’ll be able to unlock them as you progress and learn your way around your more powerful character—and you’ll need every ounce of your ability to stop the Iron Horde and continue your campaign on Draenor.

Once the threat at the Dark Portal has been (temporarily) dealt with, Alliance and Horde players will take divergent paths. Each will answer the call of their new allies to engage the native threats of the world and mount a long-term defense against the Iron Horde.